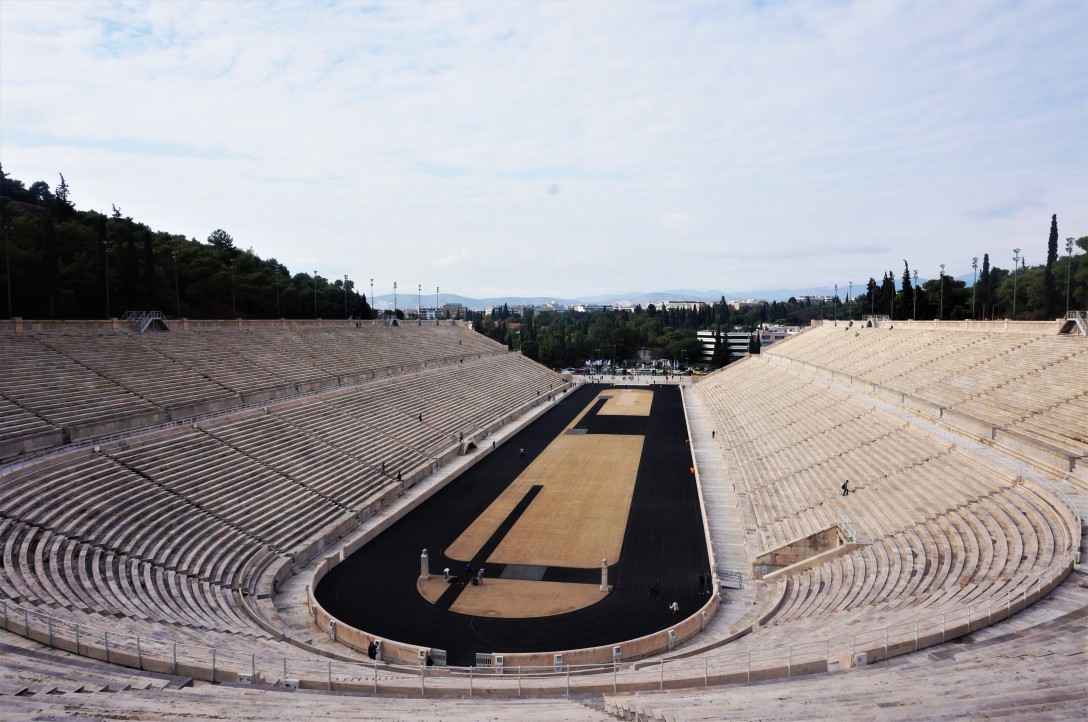 Before this race, I scoured the internet trying to figure out what to expect running the original marathon course in Athens. Obviously, the only way to really know what a race is like is to run the thing, but I was disappointed with the information available online. How bad were the hills, really? Was it an ugly course or a scenic one? So I’m sharing my race experience in the hopes that it will help someone else go into this awe-inspiring run with a little better idea of what to expect.

The bus I rode to the start line was filled with men.

Some of them chatted quietly in Greek, a handful in Italian or broken English. As the lights turned off and we drove into the dawn, silence fell. It was early, and we were solemn, mentally preparing for the task ahead.

The bus drove us out to the town of Marathon along the exact route we’d be running in a few hours. It seemed easy, in a way- the bus would drop us at our starting point, and we’d run back into Athens.

But we knew better. There were 26 miles of pain, sweat and emotion to endure first.

The ride to the start was my first real glimpse of the notorious hills of this course. I hadn’t really known what to expect, despite having talked to people that had run the race, Googled the course elevation a million times like it was going to change the 53rd time I checked it, and read reviews of the thing. People had different opinions, anything from “this is the hardest course I’ve ever run” to “nah, there are downhills too!”

Maybe it was telling that the race shirts for sale at the expo a few days prior proclaimed loudly, “FLAT MARATHONS SUCK.”

The Athens Marathon was a truly well-organized event. It was only a 2 mile jog to the bus for me, staying in an Airbnb just out of the city center, and we got off the bus at an open coffee shop in Marathon. I grabbed a coffee and made my way with the horde of runners towards the starting arena. The sun was beginning to rise over the edge of the mountains, and the sky was clear and beautiful.

Once we made it to the stadium, I hung out at the track and loosened my limbs for a bit before joining the loops of runners circling the grass field. A group of African men clad in sweats jogged elegantly in a pack, obviously elite runners prepping to race. I did a few strides past them before heading over to the start corrals.

I made my way up though the corrals and felt a little elitist when I had to show my bib to get through lines of volunteers linking arms to separate runners in different sections. I started in corral 3- not the fastest in the bunch, but definitely where the serious runners were at. We had more space to warm up than some of the other corrals, so I bounced back and forth for a bit between the rows of volunteers. Yet again, there weren’t very many women. I saw one in the corral ahead of me, and made eye contact with the only other girl in mine- we smiled at each other, a recognition of badassery. I finished as the 19th female overall, so I know there must have been more women around us, but it felt like I was surrounded by older men.

One guy was wearing a Boston shirt emblazoned with “US Army Veteran”, so I greeted him and his friend. They were happy to see another American racing. The veteran was running Athens as his 50th marathon, for his 50th birthday.

I felt comfortable, excited. I’m always on the line with men who are taller, older, often experienced. Some eye me curiously.

But I am experienced too, and tough.

When the gun goes off, I’m smiling. I’m smiling for the next few miles as it pours on us (I love rain) and we settle, quietly into the pace. The majority of the race is behind us, so there isn’t much sound beyond the pattering of our footsteps and a few knowing groans or giggles as we’re instantly drenched. People stand on the side of the course handing out olive branches. A Greek woman I met and went exploring with a few days prior told me it was essential to run with one of these branches- according to legend, Phidippidies carried one when he announced the victory of the Athenians so many years ago.

I grabbed one and tucked it into my braid.

The route was lined with people at least every half mile or so. There were rows of little kids yelling “bravo!” and sticking out their hands for high-fives. I slapped as many palms as I could. I grew up as that kid on the side of the course cheering the runners on, so I have the ultimate respect for parents who teach their children to get up early to cheer on total strangers.

I read a lot of things about the Athens course being “ugly” or not scenic, but I found it the opposite. We passed by the Bay of Marathon and I got to gaze at the water on my left, while small mountains reached for the sky on my right. There were a lot of people holding painted signs that I think were meant to protest something- but the majority of them were in Greek, so I’m not sure.

Along the course there were also a million picturesque moments. An old church framed by the stormy sky, olive trees and couples standing outside their homes waving us on, a dog that stumbled onto the course and jogged along with us for nearly a mile… The whole time I was conscious of how lucky I was to be out here, running the closest I could get to the original marathon course. It kept me going during the tough moments, reminding myself to be present for every second of the race. Returning to Athens from Marathon made me hyper-conscious of the fact that this was it. Every mile was one I wouldn’t get back, so I could either suffer and wish it was over, or enjoy and appreciate the journey that I’d traveled across the world for and had been planning for nearly a year. For me, this race was the realization of a dream.

I chose to enjoy it.

The first 10 miles flew by and then the hills started becoming real. Alexi Pappas had written something on Instagram a few days prior that stuck in my head, about telling yourself “keep going” instead of “don’t stop.” Every time I got to the point where I wanted to stop I reminded myself that first of all, it would be hard as hell to move again if I did, and that second, I didn’t have to push harder or go any faster up the hills, but I did have to keep going. Like a train, chugging uphill, like a determined motherfucking mountain goat, like Phidippidies announcing victory to his people.

You tell yourself a lot of things when you get to the painful parts in a marathon.

Along the course I made eye contact with people that cheered louder as I passed- usually women. I smiled every time, though occasionally it was more of a pained grimace. I am so proud and happy when women in sport support each other.

At a certain point we crested the last hill, and I become hopeful that I’d speed up on the downhill. In reality, the pain of descent was incredible. It felt like my quads had turned to cement, and every step sent shockwaves through my body. At that point we’d entered the city and I could no longer focus on the scenery, having spent the two weeks prior enjoying it, but I bribed myself with runner treats. Just make it two more miles and you can have another salt tab, I told myself, delirious, breaking the final six miles down to chunks. I dumped a bottle of water on my head at an aid station. At mile 24, with an eye on my watch, I realized I was within reach of a PR. I’d gone into this race without that as a goal, knowing there were hills and hoping I’d just be able to give the course my best effort. But when I saw the time I kicked it into gear, crying at that point because I felt like someone was pounding hammers across my quads (note to self: when you sign up for a race with hills, train for hills).

I gave it everything I had.

I crossed the finish line and crumpled, hunched over, onto the track. Stood up. Limped a few feet, a wreck, crying and hobbling and gazing at the crowd in the stadium around me, the stadium. I took another few steps and collapsed again. I didn’t mind. The fact that it took me a good 20 minutes to get off the track was a testament to the fact that I’d met my goal- I had left everything I had on the course.

Some kind volunteers wrapped me in a foil blanket, and I made my way to a gyro stand where I proceeded to order the fattest gyro I’ve ever seen. I sat down and devoured it, making a total mess and attracting curious glances because there were still a few tears sliding down my face as I stared into space, totally content.

As much as I wanted to stay and cheer, I’d tossed my clothes at the start (though they had an amazing bag check system and I would have utilized it if I’d known that in advance). It was cold, and I was aware that the sooner I got back to my Airbnb to take a shower and change, the better.

I made it about halfway to the subway station before having to stop and refuel for coffee. I sat down in a cafe a little too far from the finish line for the foil blanket I was wearing and the bib number I had pinned to my shirt to look normal. The owner of the cafe brought out, with my coffee, a sweatshirt- I was soaking wet, sweaty and gross, and yet he made me wear his sweatshirt while I had my coffee, one of the most genuine acts of kindness I’ve ever been the recipient of.

There is so much I love about running, but most of all, I love the marathon. There is truly nothing like it. I was so honored to be able to be a part of this race, at the origin of my favorite distance, crossing the finish at such a historic place. You could truly, truly feel it in the crowd, in the atmosphere. The marathon is a journey, every time- emotionally, physically… and this time, literally. Athens was without a doubt the most challenging, awe-inspiring and soul-fulfilling race I’ve ever run.

That said, I recommend you sign up for next year.