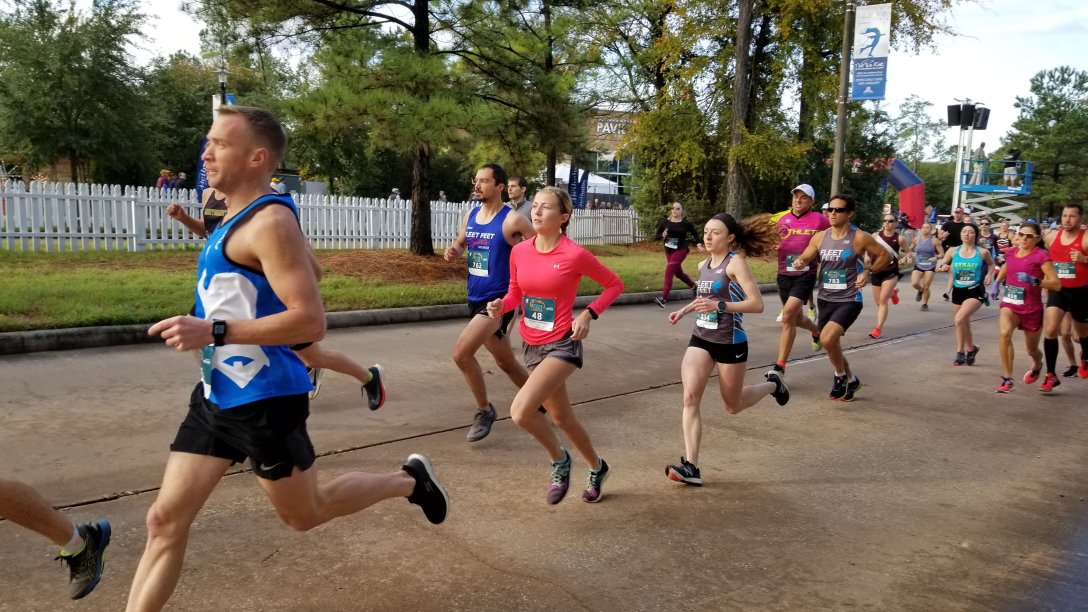 It always has. Races matter to me and I have goals. As anyone who has any kind of goal will understand, going out to reach for them is one of those things that cause your stomach to flip, because there’s a risk you might not make it.

But that’s what brings us back to the starting line, isn’t it?

The competition. The thrill of chasing times, of pushing ourselves to our limits and past them. The endless hunt for greater speed, endurance, success. There’s no challenge without the risk of failure.

There is something primal, something inside us that encourages us to seek out these challenges, these ways to test ourselves that set our souls on fire.

Don’t you love the satisfaction of knowing you’ve put in the work? The joy in unleashing that buildup, that collection of early mornings and timed runs and rest days coiled up inside you like so many springs waiting to be released? It’s thrilling just to go out there and see what you can do.

Right now I am strong as ever.

I am faster than I’ve ever been.

I know this and yet I am still nervous before every race, because I also know that ultimately, the real battle is in my head.

Ready or not, the starting line becomes symbolic. When the gun goes off it signifies the beginning of a battle with ourselves. Running is only a competition with others on the surface. Ultimately it is all about how hard you can fight that voice in your head telling you to slow down, make it easier, give up. For if you’re out-kicked to the finish at the end of the day it’ll still be okay as long as you know you truly gave it everything you had.

Prefontaine is known for having said this:

“To give anything less than your best is to sacrifice the gift.”

It took me ages to understand fully what he meant by that but I think I’m getting it these days- or at least uncovering my own interpretation of it. Words have meaning and quotes like this have power when you place them in the center of your mind on race day.

When you run, when you train, you develop strength and power and the ability to damn near fly.

Placing, earning that spot on the podium is fun. Medals and trophies and accolades are something we seek because they validate us against our peers, just as our times are proof of what we can do measured against a clock.

But effort is the real gauge of our athletic prowess, and competition is about laying it out there.

It’s about giving the race everything you’ve got.

Every ounce of breath, the last drops of strength you can wring from your exhausted muscles… a great race is one where you leave your spirit bare out on the track, the road, the trails. A great race is one where, however you place, whatever your time, you can look back on the moments where you could have chosen to be weak and you didn’t. You chose to be strong and fight for it instead. A great race is one where you can breathe easy afterwards because the whole time you were pushing forward, working hard and loving every moment, the pain and the pleasure of it, and you nearly fell across the finish line because you graced the course with the best of your athleticism. A great race is one where you may not have been the fastest or strongest out there on that day but you won the battle against yourself when each time you could have chosen fear or weakness, you chose strength and courage. When it hurt like hell and instead of saying, no, this is too much, I’ll back off, you said no, I can take more pain that this and pushed harder.

It is indeed a gift to be able to run, to be strong enough to run well and fast and far. To slack off in a race, to decide you’re too tired or to believe the misguided fear that you are not strong enough, is to disrespect the gift Prefontaine so wisely reminded us must not be forgotten.

You can be fast, and you can be strong. You can let it hurt. The trick is to believe it.

In truth, as well, there are no limits. only the ones we impose upon ourselves. I mean, realistically of course there are limits that exist but we cannot know them until we test ourselves to the fullest of our capabilities.

I have a race coming up and I’m nervous, as always. But I know, finally, that this means I’m ready. This means I care about the result, which will make it easier to remember, when it hurts, that I signed up for this, I wanted this. As Olympian Alexi Pappas writes, it is wise to acknowledge your goals “so that when you accomplish them you’ll know you were brave enough to want them.” I think, too, that holding your love of the sport in mind when you compete holds enormous value.

Competition is not something to be truly afraid of. Allowing yourself to get too nervous is to give your fears confirmation, when in truth your fears tell lies and the truth is that you are here and ready for this. That you are doing this because you wanted it enough to work towards it.

A race is simply the physical manifestation of your passion and love for the sport.

So next time you race, get out there. Compete. Lay it all on the line.

And love every minute of it.